The new Kudumbayogam Directory is now available to view online..

Annual family get together on 6th and 7th of March 2020

This web site is an attempt to allow the information currently held by the members to be integrated and shared with others who are interested. It aims to provide a common forum to bring together Kaleeckal family members scattered around the world and help them learn about their genealogical past and read history of their ancestors 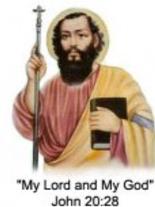 There is a wealth of corroborative evidence to support, and no good reason to doubt the tradition that the Apostle Saint Thomas arrived in Kodungalloor (Muziris) in Kerala in 52 AD, preached the gospel, established seven churches, and moved on to other kingdom, returning to Madras (Mylapore) in 72 AD where he was martyred that year. Writers of the 4th century, St. Ephrem and St. John Chrysostom knew also about the relics of St. Thomas resting at that time in Edessa, having been brought there from India by West Asian merchants.

History has recorded that Prakkanam Kaleeckal family members are descendants of the Kaliangal Brahmin family converted to Christianity by St. Thomas. One group of family members moved to Sabarigiri (currently part of Pathanamthitta district) and worshiped at nearby Nilackel church established by St. Thomas. The regional riots and epidemics in the region during the 5th Century forced the family members to abandon the area along with several hindu families.

Few of the ancestors from Nilackel settled in Kadambanad along with some hindu families. The settled down on one side of a hill and established a church there. The family came to be called Pallivathukkal. The hindu families settled down on the other side of the hill and established a temple there. That hill is still called Nilackel hill. The Pallivathukkal family members later moved to different parts in search of fertile land. Around AD 1600 one family moved to Prakkanam and settled in the area called Kaleeckal. Kaleeckal kudumbayogam members are their descendants.

The Kaleeckal family members now belongs to most major Christian denominations viz. Orthodox , Marthoma , Jacobite ,Catholic , CSI etc. The total strength of the family members is over 2000. It is the grace of the Almighty God Jehovah , Son Jesus Christ , Holy Spirit and the blessings of the forefathers that keep this great family and its members well and strong for centuries.